Warning: count(): Parameter must be an array or an object that implements Countable in /srv/users/scottishtraumanetwork/apps/scottish-trauma-network/public/wp-content/themes/stn2017/parts/hero.php on line 164 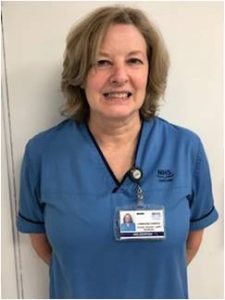 How do you feel the first six months in Scotland’s first Major Trauma Centre has gone?

The first 6 months have gone in so quickly, as a team, I really feel we’ve made major leaps forward in ‘finding’ patients and offering them as much support as possible from the whole team of specialists involved in the MTC. Patients have expressed incredible gratitude for the speed in which we seem to get things ‘sorted’ for them and we seem to be getting each patient through the MTC pathway in a very timely manner.

You are one of the first Trauma Case Managers to be appointed in Scotland- what do you feel has been the best part of your role so far?

It’s an incredible privilege to be involved with the Major Trauma patients’ families and carers, and while my role continues to evolve, I can honestly say that I’ve really enjoyed all aspects of my role. Teamwork, networking, always trying to achieve the best results for all of our patients, their families and carers.
How do you feel you have developed over the past six months? I’m really just at the beginning of my role, and I’m aware that I have much to learn from patients and family’s feedback, as well as all the specialities, but thus far, I feel I have learned an enormous amount about the patients conditions, treatments and long term care.

What are you looking forward to achieving in the next six months?

There is a lot still to establish and achieve over the next 6 months, having continuous contact with patients and their families, and receiving more feedback from patients, so that we can continue to grow and improve the service. I’m also looking forward to networking with colleagues across the Trauma Network in Scotland.

Thanks to Lorraine and the team in the North of Scotland for sharing this interview.