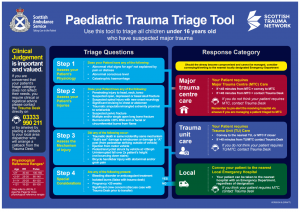 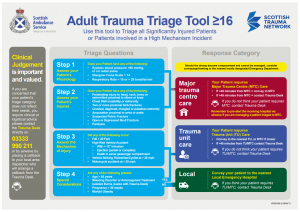 The MTTT was developed by the STN to identify which patients are most likely to benefit from being taken directly to an MTC even if it means bypassing closer hospitals. This approach is widely accepted internationally as leading to a greater number of survivors, and the STN Tool is very similar to those used in other network. It is also in line with the original US research which informed the National Institute for Health and Care Excellence (NICE) guidelines.

Key to the development of the MTTT has been the 45-minutes cut off. Patients more than 45 minutes from an MTC, even with severe injuries, are taken to the next best option which is usually a Trauma Unit (TU). This decision is a balanced calculation considering times and availability of certain critical interventions such as airways control, blood products and damage-control surgery. Some of these factors can be over-ridden if a PHCCT RED team is in attendance, and able to provide some or all of the required interventions. In the direst of emergencies, when a patient’s airway cannot be protected, there is a provision in the tool to divert to the nearest hospital with Anaesthetic support on site.

Central to the operation of the MTTT is the peer support provided by the Trauma Desk. Crews who wish to cross check a difficult decision can contact the desk, and the Trauma Desk may also be in a position to offer additional support such as RED or YELLOW assets or aeromedical transport options.

In addition to identifying patients requiring transport to an MTC, the MTTT also identifies patients who would benefit from being transported to a TU rather than local emergency hospital. One group requiring particular focus is the elderly or the so called “Silver Trauma” group of patients. The STN, in consultation with Orthopaedic Surgeons, has decided that the commonest significant orthopaedic injury in this group is a fractured neck of femur following a low fall. This injury

should be included in the operation of the MTTT in order to filter patients towards centralised emergency orthopaedic care. It is felt with this will improve outcomes for this large group of patients in additional to the gains seen in groups taken to the MTC with more complex injury.

Using the MTTT will likely lead to some displacement of ambulance from their normal operational areas. This effect is thought to prove small for the relatively low numbers with suspected fractured neck of femur. SAS has recently completed modelling work to mitigate any effect on local ambulance response times, with the addition of ambulance resources in some key areas served by the new Trauma Units.

As each region has gone live with the MTTT, SAS have taken an educational package around the relevant ambulance stations to discuss its deployment. The MTTT went live on the 30th August in Scotland.

The PMTTT follows a similar format to the adult MTTT. Whilst the evidence is not as strong for the triage and care of the paediatric major trauma patients, the PMTTT has been developed by the STN Paediatric Group and thus is based on the expert opinion of the group. A UK National Institute of Health Research (NIHR) funded Major Trauma Triage Tool Study (MATTS) has commence research regarding the triage of paediatric major trauma patients, with input from the SAS Trauma Team and STN Paediatric colleagues.

The PMTTT will be introduced in early 2021 in conjunction with the West and South East regions going live. This will allow education, guidance and support to be provided to ambulance clinicians simultaneously with the MTTT.

If you have any questions or queries on how the Major Trauma Tools are used in Scotland, please contact either the STN nss.scottrauma@nhs.scot or SAS.MTTTfeedback@sas.nhs.scot